Something that never ceases to amaze (depress) me, is how extremely common it is to see causal claims in RCTs, that are not part of the randomization. For instance, the relationship between treatment adherence and outcome, or between alliance and outcome, are often analyzed but seldom experimentally manipulated. This is basically observational research disguised as experimental, but without DAGs, instrumental variables, propensity scores, or any other technique used in observational research. Hence, the effects will almost surely be biased in an unknown direction. This is a post I’ve been planning to write for a long time, but put off since the theory and methods are so well covered in, for instance, epidemiology. However, when brms added support for multivariate formulas, I figured I could show how some of the techniques can be implemented in R, and their Bayesian counterparts using brms. So, in this post I do three things:

Let’s assume we’ve performed an RCT and compared some psychotherapy condition to some control condition. Patients in these types of trials seldom complete all scheduled sessions, or adhere 100 % to the treatment. It’s rather common for researchers to try to see if there is some relationship between adherence and treatment outcome. Which is a valid question, if there is no added effect of actually “receiving” more of the treatment, then that should be a problem for your theory, or at least some of the components of that theory. However, what usually happens is that researchers somehow forget that the variable “adherence to therapy” is not experimentally manipulated. Unless we have randomized patients to receive 1, 2, …, 10 sessions, or to do 1, 2, …, 10, exposure exercises (and somehow ensured adherence was 100% in all conditions)–then we are now longer in RCT country!

A really simple scenario with one know (or unknown) confounder is shown in the DAG below.

Each arrow represent causal influence of one variable on another. Y is the observed outcome, adherence is often measured by some proxy, like the number of sessions completed–that we assume is a good indicator of treatment “dose”, it could be any other proxy for treatment adherence. So, what the graph is saying, is that treatment allocation (randomization) influences the outcome (Y) via the amount of treatment received (adherence). Thus, unless something went horribly wrong, randomization should be strongly correlated with S, and only influence Y through the treatment received (S). By definition this makes randomization an instrumental variable. However, the problem is that the effect of S on Y is most likely confounded (U). For instance, baseline functioning might be related both to a better prognosis (better outcome) and treatment adherence. It is easy to come up with scenarios where the relationship could be either positive or negative. Higher baseline functioning could be related to a better prognosis, and to better treatment adherence, or, a patient could be too depressed to actually adhere to the treatment. It is also plausible that worse baseline functioning make you more motivated to adhere to your treatment. Whatever the relationship might be, it is clear that the causal effect of treatment adherence will be confounded.

We will deal with three types of scenarios where a variable U confounds the estimate of treatment adherence:

First, let’s remind ourselves what is commonly estimated in an RCT is the average treatment effect (ATE), or some related estimate,

The data generating model (DGM) is, thus, that adherence depends on Ui​, the confounder variable,

Where f() is just a function that centers and scales the confounding variable, so that the mean adherence is 7, and ei​ is just random variation that influence the relationship between Ui​ and Si​. Moreover, the observed measure of adherence could be a noisy measure of a patient’s actual adherence, Si​, e.g. sessions completed,

To generate the outcome, we first simulate Yi​(C), and then calculate Yi​(Tx),

So that βS​ is the causal effect of treatment adherence,

Lastly, the outcome is generated as,

Where Ri​(Tx) is 1 for participants allocated to the treatment condition and 0 otherwise.

Now, that we have a DGM, let’s generate some fake data and fit different models. We’ll start with a standard OLS regression, the first model would make sense in the absence of any hidden or residual confounding (extremely unlikely). The second model (“naïve OLS”) makes little sense, since it only analyze the treatment group, and as we’ll see, further confounds prognosis with the causal effect of treatment adherence. Sadly, this way of analyzing psychotherapy trials is really common… Anyway, lets generate some fake data. I’ll use a two-level random intercept-only model as a starting point, and assume that the confounder (baseline functioning), is measured without error.

First, we fit the two standard OLS models where we are adjusting for pretest scores.

Now, let’s try to use treatment assignment as an instrument to better uncover the causal effect of adherence. Two-stage least-squares (2SLS) is a common method to estimate an IV model. The point of this post is not to explain IV regression, it’s explained well in standard econometric textbooks (Wooldridge, 2010; Wooldridge, 2015). And in the context of psychotherapy research in the articles by Maracy and Dunn (2011), or Dunn and Bentall (2007). The very short explanation, is that 2SLS is basically to regress session on the instruments, then regress y on the predicted sessions from Step 1. This can be done using lm() to get point estimates, but the standard errors will be highly suspicious.

However, 2SLS is easier done with ivreg() from the package AER. The same structural model is fit using this code.

The model can also be thought of as a special case of a structural equation model, and fit with e.g. lavaan.

This allows extending the model a lot using brms highly flexible modelling syntax. Moreover, once you’ve exhausted brms capabilities you can get the stancode() and further customize the model yourself.

Let’s also do a small simulation study, to better show the impact of observed confounding, residual confounding, and hidden confounding. We’ll use the OLS and IV models shown above. For each of the three scenarios, 5000 data sets were generated, with 50 patients per condition. The correlations between the variables are shown in the figure below, the actual values are arbitrary chosen, and the resulting bias, and its direction, is not meant to reflect real data, instead the values are meant to highlight the different types of confounding. 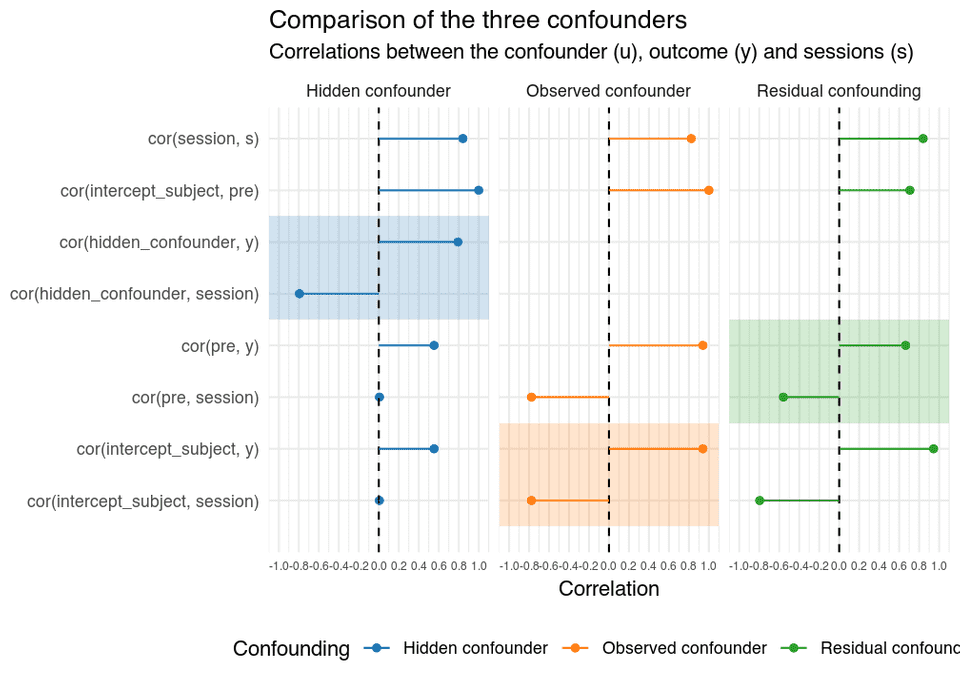 In the figure, s is the latent adherence variable, session the observed adherence, intercept_subject is the baseline confounder, that is measured with or without error by pre, and y is the outcome.

The relative bias of the estimated adherence effect is shown in the figure below. 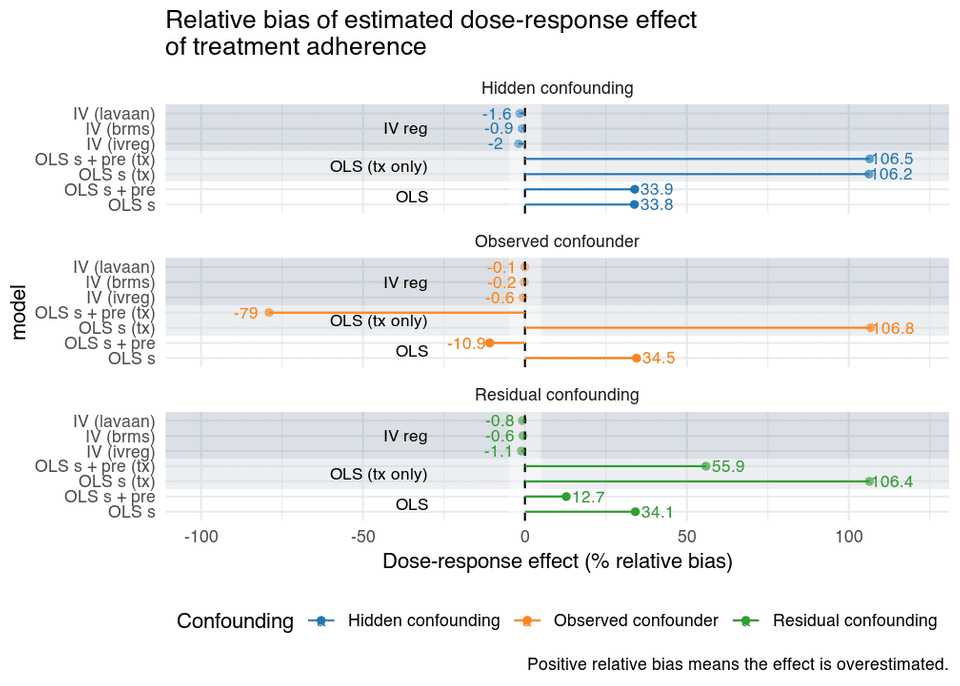 In the figure, we see for the OLS models, that when there’s:

And the overall pattern is that:

We see the same results if look at the coverage probabilities of the confidence intervals.

Coverage probabilities of the CIs 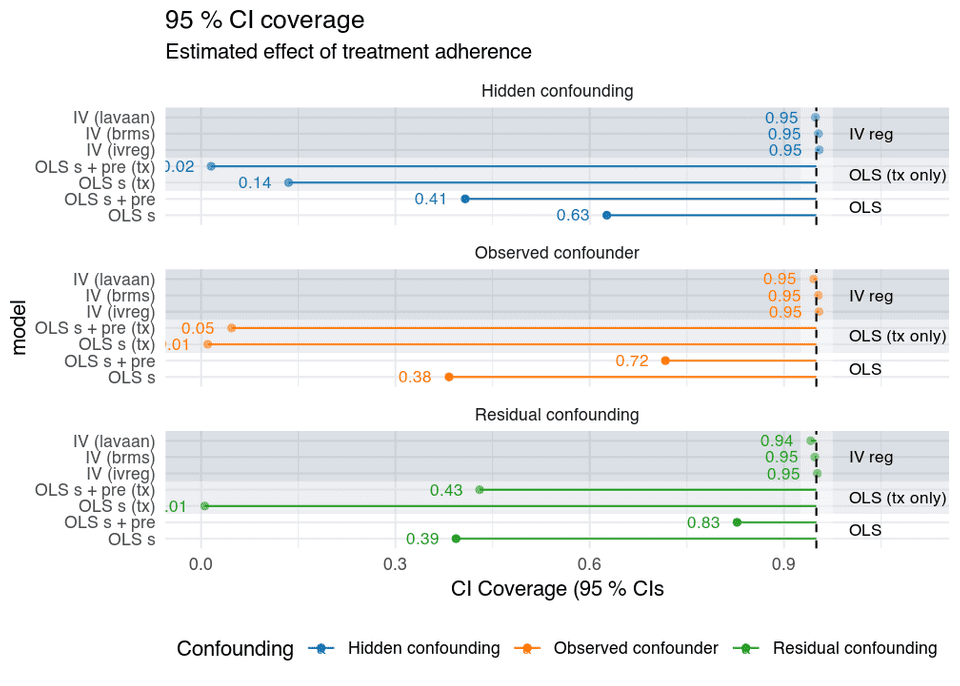 When less is more–collider bias

Let’s throw in another example of how things can go wrong, this time by adjusting for a collider. We extend the first DAG, and add another covariate therapeutic alliance. A researcher might think that by controlling for X (alliance), the dose-response relationship will be more clearly revealed. Or they might just do a multivariable regression and think “hey, both therapeutic alliance and adherence probably predict treatment outcome, let’s throw both in and see what p-value we get”. However, the problem is that alliance might neither be a predictor of outcome, nor a confounder of the adherence and outcome relationship, instead it could be a common effect of adherence and a hidden confounder (i.e., a collider). Obviously, this example is made up and alliance is just a placeholder–there’s so much going on during a psychological treatment that it would be easy to come up with other colliders. In the DAG bellow, conditioning on alliance opens up a path between adherence and the hidden confounder, that bias the relationship between adherence and outcome even more.

If we also simulate this model, and assume that U1​ is measured with error, and use the same IV regressions, but add an OLS model that also includes the collider we get these results. 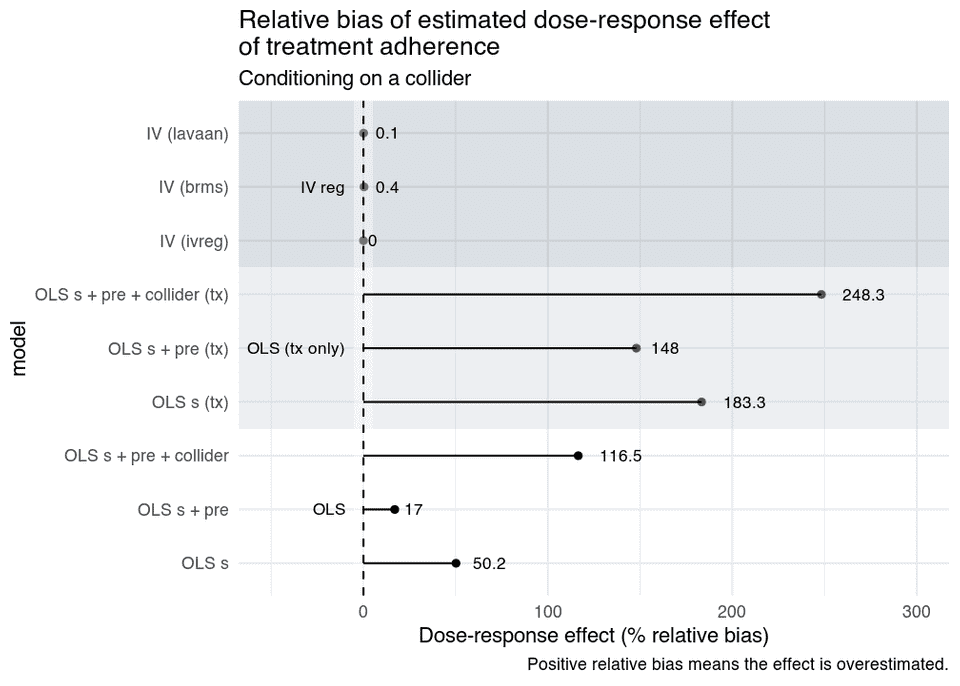 What we see is that: 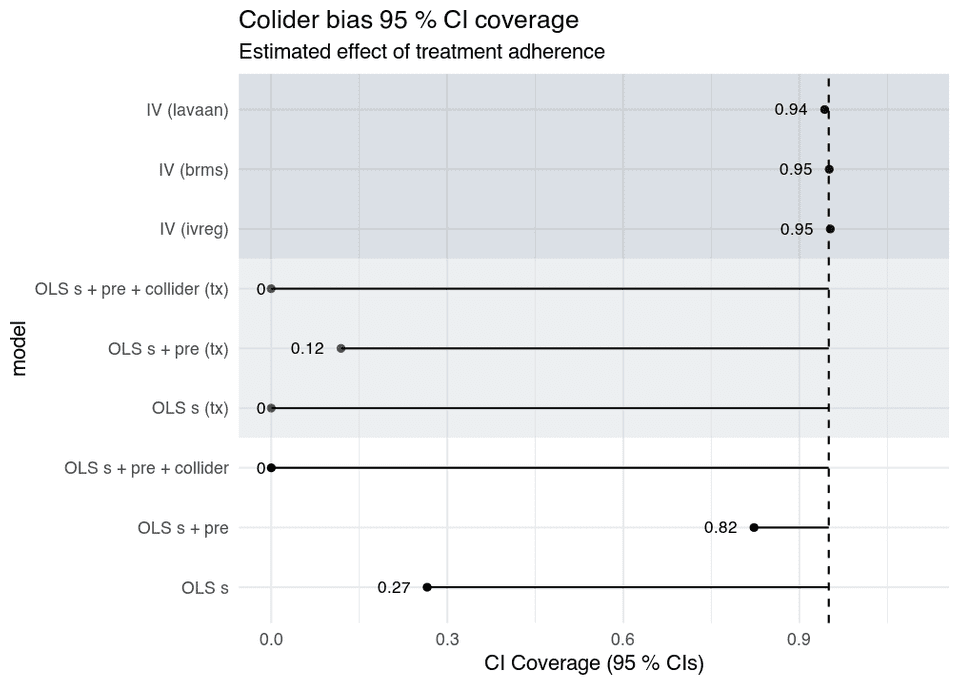 Setup and run the simulation.