When a multilevel model includes either a non-linear transformation (such as the log-transformation) of the response variable, or of the expectations via a GLM link-function, then the interpretation of the results will be different compared to a standard Gaussian multilevel model; specifically, the estimates will be on a transformed scale and not in the original units, and the effects will no longer refer to the average effect in the population, instead they are conditional/cluster-specific. In this post, I will deal with linear mixed-effects models (LMM) that use a log-transformed outcome variable. This will be the first part of a three-part tutorial on some of the finer details of (G)LMMs, and how Bayes can make your (frequentist) life easier. In each post I will focus on:

In part 2 I will cover a GLMM with a binary outcome, and part 3 will focus on semicontinuous (hurdle/two-part) models when the outcome is a skewed continuous variable that include zeros.

The aim of this post is also to show:

As an example, we will use a simple hierarchical design with clusters nested within either a treatment or a control condition. This is a classic 2-level multilevel model.

In this model, the natural logarithm of y is normally distributed conditional on the cluster-specific effect ui​ and the treatment variable TX. Let’s assume y is the average money (in USD) lost gambling per week (since I do research on gambling disorder). Gambling expenditure is sometimes quite well described by a lognormal distribution, or a (generalized) Gamma distribution. Importantly, the methods in this post can quite easily be tweaked to work with other response distributions. Each treatment arm has n2​ clusters, and each cluster has n1​ observations. In this example clusters refer to e.g. schools, centers, groups, and the first level are subjects. However, it would be easy to use the contents of this post for a longitudinal model where clusters refer to subjects, and the subjects have repeated observations.

The model parameters are

We can fit this model using brms (or rstanarm, lme4, etc).

Using the notation of our 2-level model, we get these results

All of the estimates are on the log scale, and they do not have an immediate interpretation on the natural scale. To further complicate things we should also remind ourselves that the effects from (G)LMM have cluster-specific interpretations (“subject-specific” in a longitudinal model when clusters = subjects). Researchers who work mostly with LMMs sometimes tend to forget this, since for LMMs the cluster-specific effects are equal to the population-average (marginal) effects. The non-linear transformation of either the data (like the log-transformation) or via the link function in (G)LMMs both means that back-transformation of the model’s estimates from e.g. the log scale does not give the expected values on the natural scale (cf. Jensen’s inequality).

In the figure below I try to illustrate both the cluster-specific nature of the model, and the transformation between the log scale and the natural data scale, without being too technical. 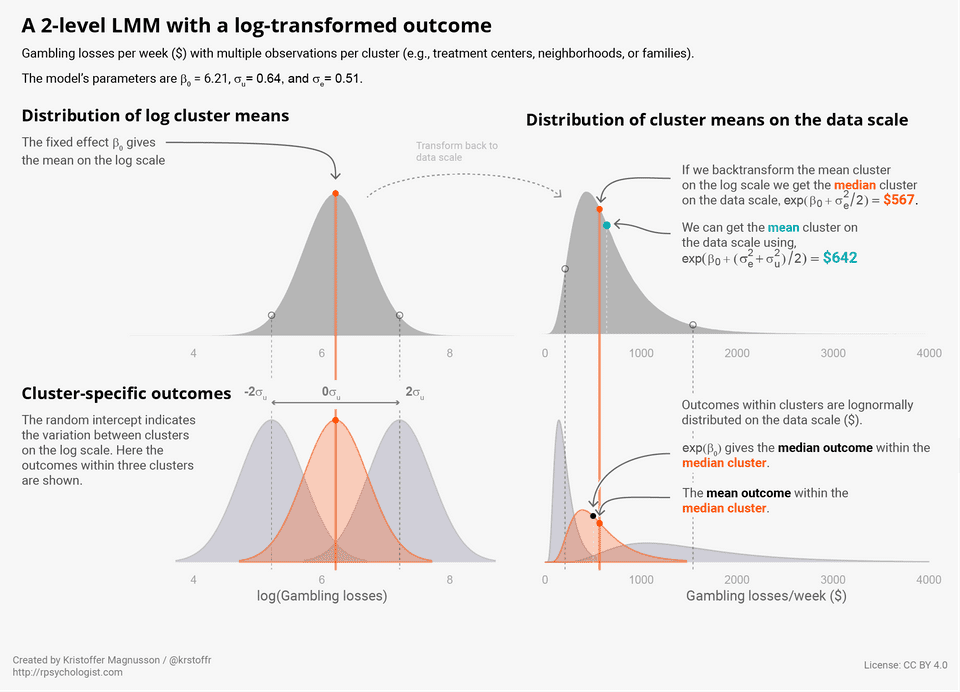 How to calculate marginal effects on the data scale

So how do we derive the numbers presented in the figure above? Well, for the lognormal distribution with the log mean μ and the log SD σe​ we have:

The correct expectation is

In this case, we can also derive an exact and simple solution using the moment-generating function of the lognormal distribution (see Proof 1: left as an exercise to the reader 🤓)

A third option is Monte Carlo integration. Were we simply simulate a large number of cluster outcomes on the log scale, back-transform to the natural scale, and then get the average. For multivariate integrals (e.g. models with correlated random effects) this is often the simplest solution that also works well in practice, although the package cubature offers a fast solution using adaptive numerical integration.

We see that all three methods give the same result (within Monte Carlo error).

Can we interpret the cluster-specific values?

So, if the expected value for the outcome group is 642 USD, and exp(β0​+2σe2​​) = 567 USD is there a meaningful interpretation of 567? As shown in the figure above, this is the expected value for the cluster at the center of the distribution of cluster means on the log scale. Since percentiles are invariant under a monotonic transformation (and the mean is equal to the median for the normal distribution), this cluster (with ui​=0) is also at the median on the natural scale.

So to summarize, the cluster-specific effects are,

and the expected marginal mean in each treatment group is,

Using the results above, the cluster-specific average treatment effect on the original scale is,

And the marginal treatment effect on the original scale is,

Most know that if we take the exponent of the log difference we get the % change. Generally, these multiplicative effects are also cluster-specific. However, for our simple model exp(β1​) gives both the cluster-specific and population-average effect. We can see this if we look at the ratio of the expected conditional outcome in the treatment and control group,

and similarly for the marginal outcomes

The cluster-specific and population-average effect is the same. However, this is not true in general for nonlinear transformation or GLMM link functions (which we shall see in part 2 on binary outcomes).

95 % CIs for the backtransformed marginal effects

Getting back to our fitted model, let’s see how we can transform the estimates into the posterior distribution of e.g. the marginal mean outcome in the control group. We do this by applying the back-transformation and marginalization using all the posterior samples of β^​0​, σ^u​, and σ^e​.

As one would expect, estimates of the population effect are less precise compared to condition on a specific cluster effect.

Let’s summarize all the results from the model, both the conditional and marginal, absolute and multiplicative treatment effects.

Let’s compare our results to the predicted means we get with brms::fitted and brms::marginal_effects

We see that this is exactly the same as the median outcome (cluster-specific outcome) in the control group. I’ve seen some people confused about this since the function is called marginal_effects.

Limiting inference to only the included clusters

Let’s look at the predicted mean for the control group using the fixed effects model.

Which is really similar to the control groups sample mean which is 636. Now let’s compare the posterior distribution from the fixed effects model, to using our multilevel model to average over only the included clusters (and not the estimated distribution of clusters). 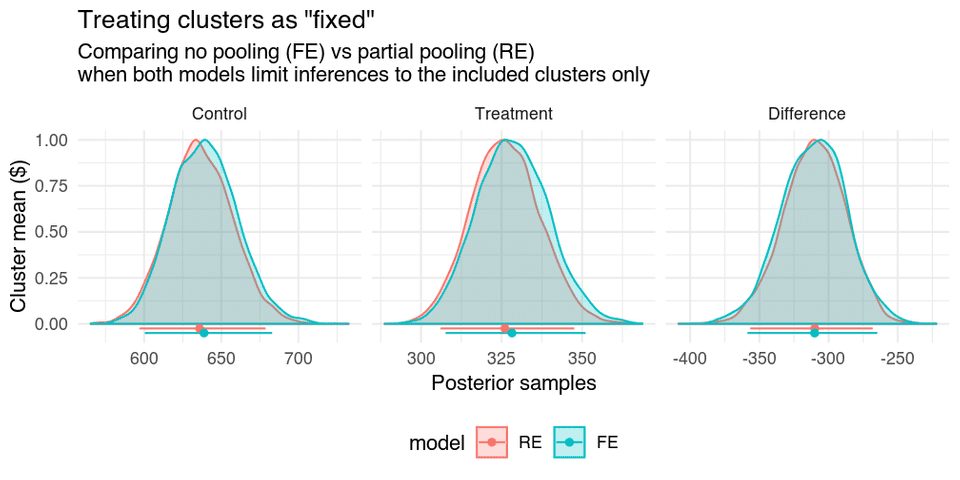 We see that the results are highly similar. Although, the models behind the results do differ. If we look at the estimates for the specific clusters we can see the—in this model very weak—effect of partial pooling in the multilevel model. 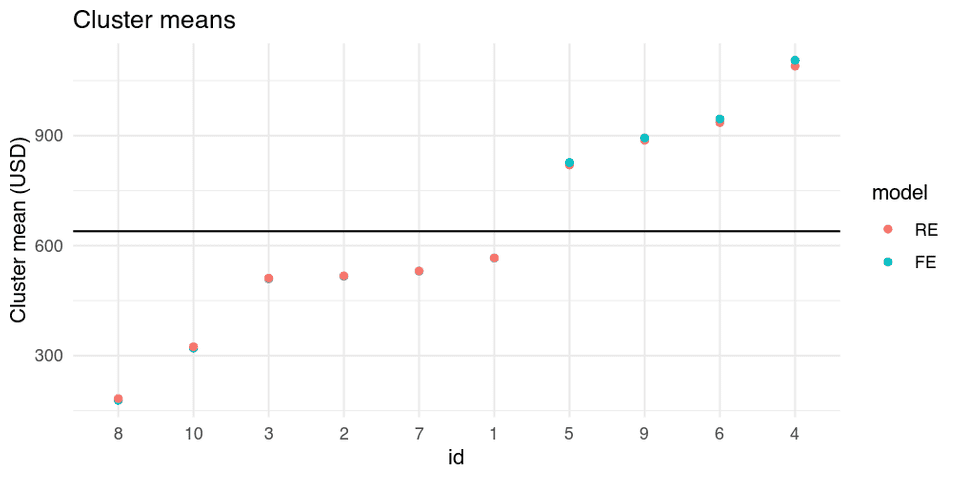 ICCs on the data scale can be calculated using the same techniques we used for the marginalization of the outcomes. You can read more about this in the context of GLMMs in Villemereuil et al. (2016; and the related R package QQglmm). Here is an example, first we calculate the marginal mean

then we use the marginal mean to calculate the expected variance between clusters on the data scale,

and lastly we calculate the expected variance within clusters on the data scale,

Where (exp(σe2​)−1)exp(2x+σe2​) is the variance of the lognormal distribution evaluated at x.

The ICC on the response scale in then

Since this is also a one-dimensional integral we can use integrate,

If you find simulations more intuitive, the Monte Carlo version would be

Great! We also see that by calculating variances on the data scale the ICCs are lower, in this case, the difference is small, but if the log variance is large this difference can be very large. So when you see ICCs from lognormal models or GLMMs you should ask if they are on the transformed (latent) scale or on the observed (data) scale, and if the scale is appropriate for the research question.

I began by promising that the methods in this post could make your frequentist life easier, and then continued to only fit Bayesian models. So let’s do a small simulation study to evaluate the frequentist properties of this model and all the transformations and marginalizations. I will try two different models, shown in the table below, each model will be evaluated using 5000 replications, and I will fit both the correct model using a lognormal response distribution and a standard LMM using the Gaussian response distribution.

In the figures below we see that the posterior median show mostly negligible bias for both the original parameters and the transformed marginal effects. The Gaussian model has the most trouble with the variance components, which show substantial bias. 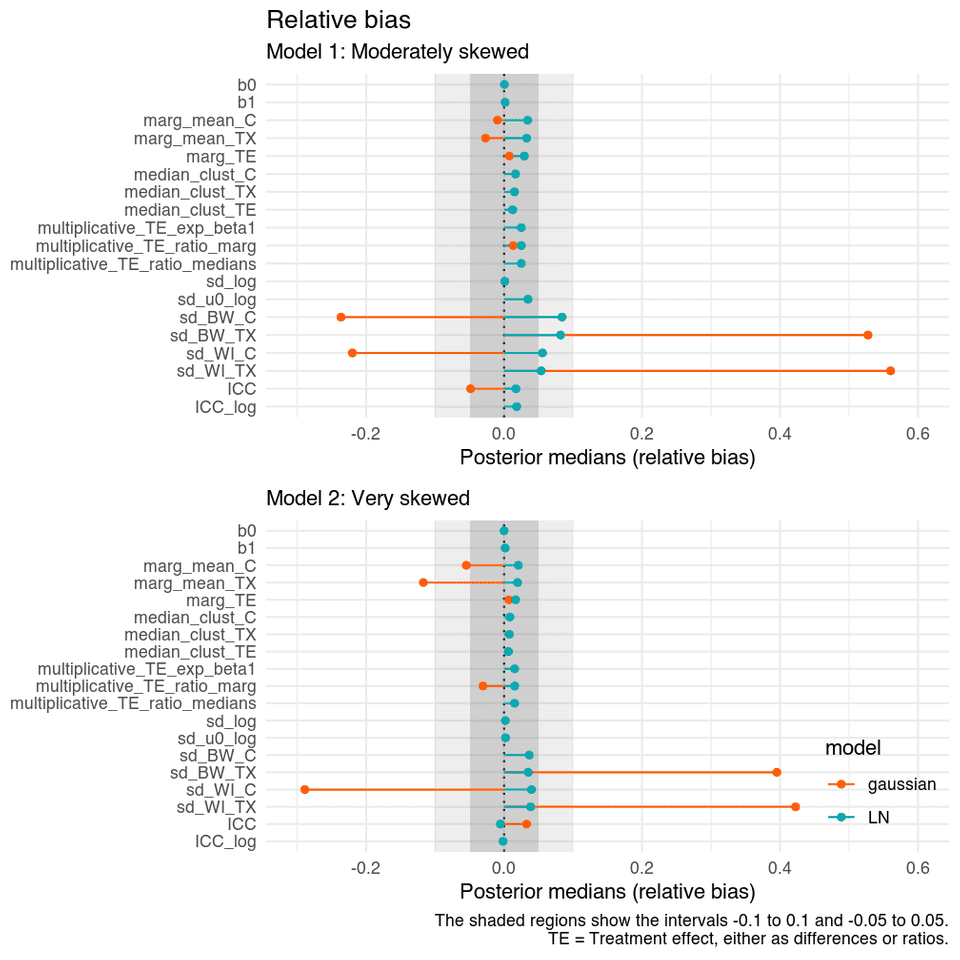 If we look at the coverage probabilities we see that the lognormal model’s posterior intervals have nominal coverage rates for all parameters. The Gaussian model has slightly worse coverage for the treatment effects, but not that bad. However, the CI’s from the Gaussian model does a poor job of capturing the true ICC and variance components. 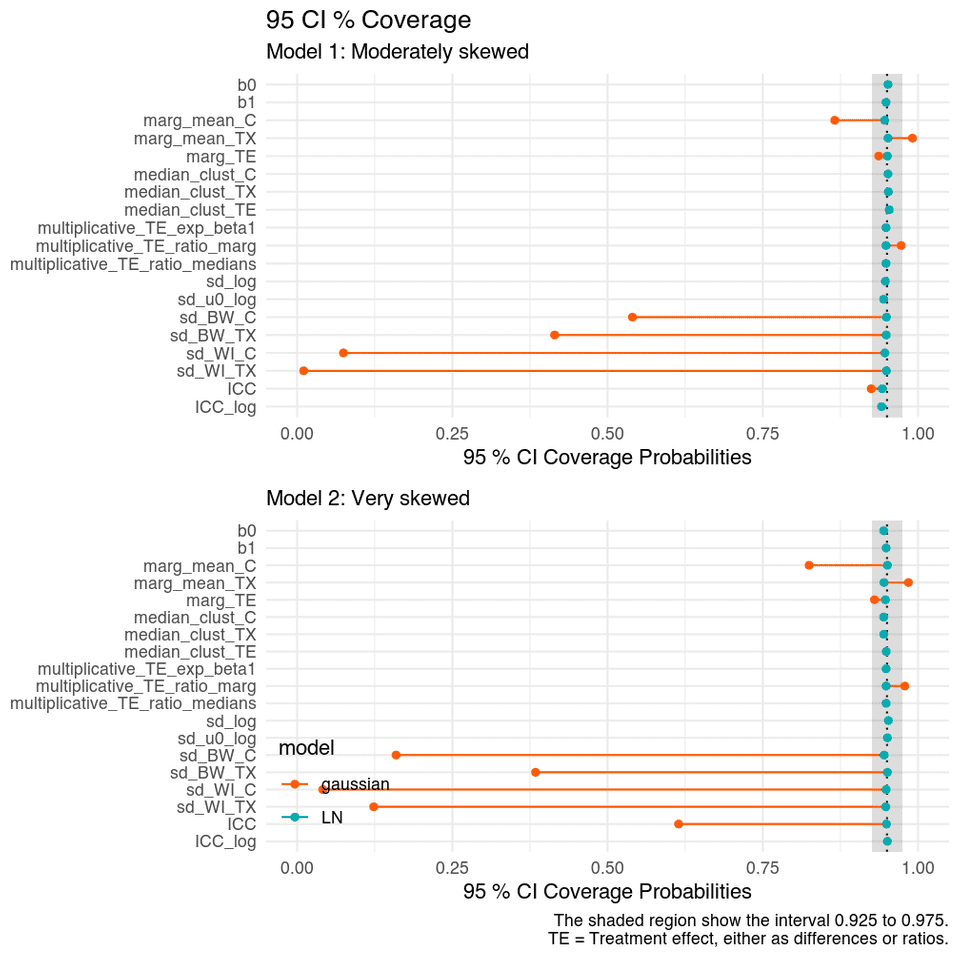 Lastly, let’s take a closer look at the marginalized treatment effect on the data scale. The figure below shows a sample of the confidence intervals for the difference in the average money lost gambling from the two conditions, from Model 2 with more skewed data. We can see that the, although, the normal model is quite robust and the estimated effect is unbiased, it is less precise which leads to reduced power and CIs with worse coverage compared to the true lognormal model.

There is a lot of information in this post, so let’s summarize the key take-home messages:

The issues covered in this post is dealt with in many articles, here is a selection of relevant articles: