PubMed publications in 2011 by 202 world countries: who’s the winner? 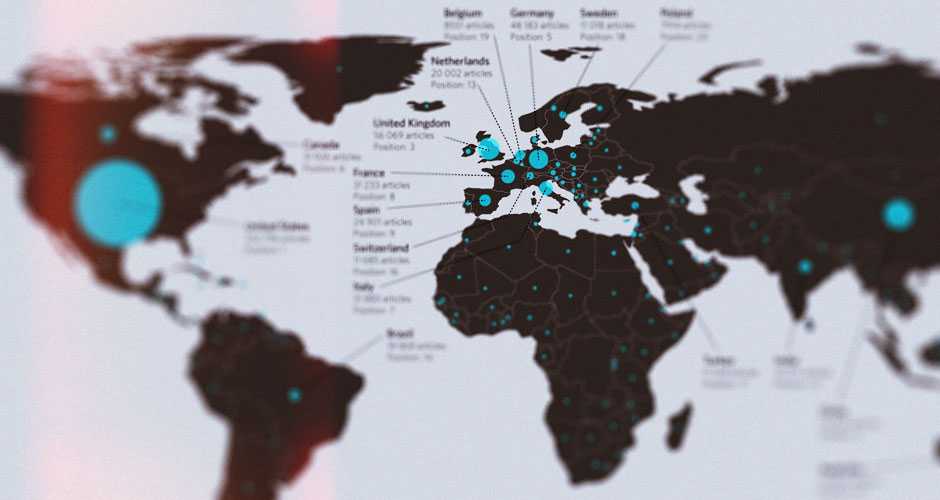 I had this idea that it’d be fun to look at all PubMed’s articles from 2011 and extract country affiliation for each individual country. So I set out to do just that, but in addition to just look at 2011 I also looked at proportional change in publication 1980–2010 for the top 20 countries. The data for 2011 is visualized on a world map both as a bubble plot and as a heat map.

It turned that this project weren’t as straightforward as I first had anticipated. Mainly because PubMed’s affiliation field is a veritable mess with no apparent reporting standard. I imagine there are databases who are much more suited to this task than PubMed.

There were 986 427 articles published in PubMed in 2011; so I, naturally, used R to extract national publication counts. I did this by downloading all citations into one 8.37 Gb XML-file, imported the affiliation strings into MySQL and then used R to extract country affiliation using grep and regular expressions.

To avoid unnecessary manual work I used lists of country names, U.S state & university names, India states and Japan universities. I also looked at word frequencies for the affiliations strings that couldn’t be matched, and used this to make additional pattern lists. Lastly, I also used mail-suffixes to extract affiliation.

To find out how many mismatches my script perfomed, I drew a random sample (n = 2000) and manually screened for errors. 22 errors were found, and all of them entailed the string being matched to the correct country plus one incorrect country, i.e. this string were matched to both UK and US (because “Bristol” is matched to UK):

It’s not really a big problem since it only occurs in 1.1 % of the sample. The following countries had erroneous extra matches in my random screening sample:

Moreover 1.8% of the affiliation strings couldn’t be matched to any country, by analyzing the word frequencies for the unmatched strings, I concluded there didn’t appear to be any words that could be used to identify an significant amount of countries.

Additionally, I compared the number of hits for my top 20 countries to the corresponding hits when searching PubMed using rudimentary country queries. These were the results:

The measurement error is a bit high in countries like Poland, Switzerland and Spain. Nonetheless, I decided to use these PubMed quires to look at annual publications for these countries 1980–2010, using my PubMed trend script

In total 202 countries were extracted, with the publication distribution looking like this: 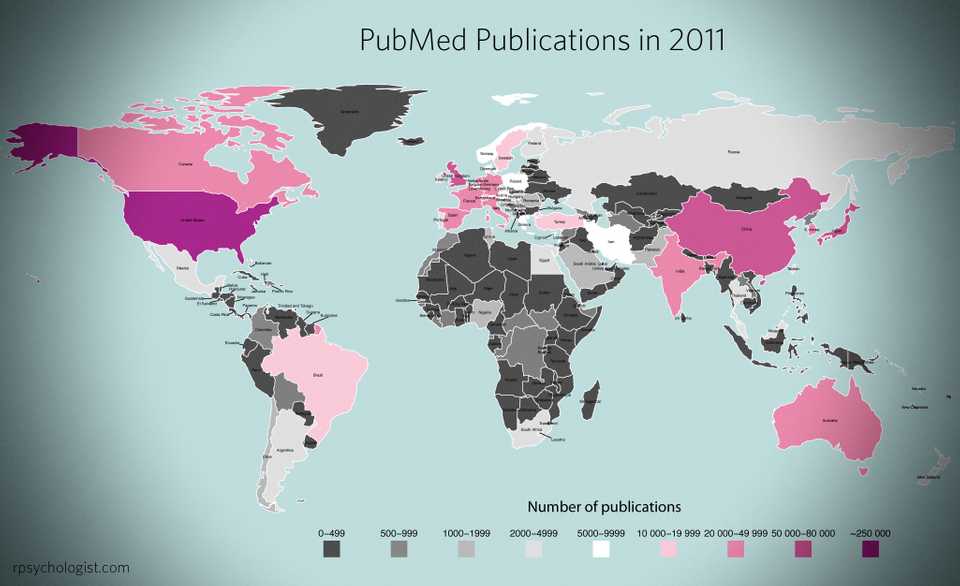 The same plot as above, but with the bubble size representing publications per capita. 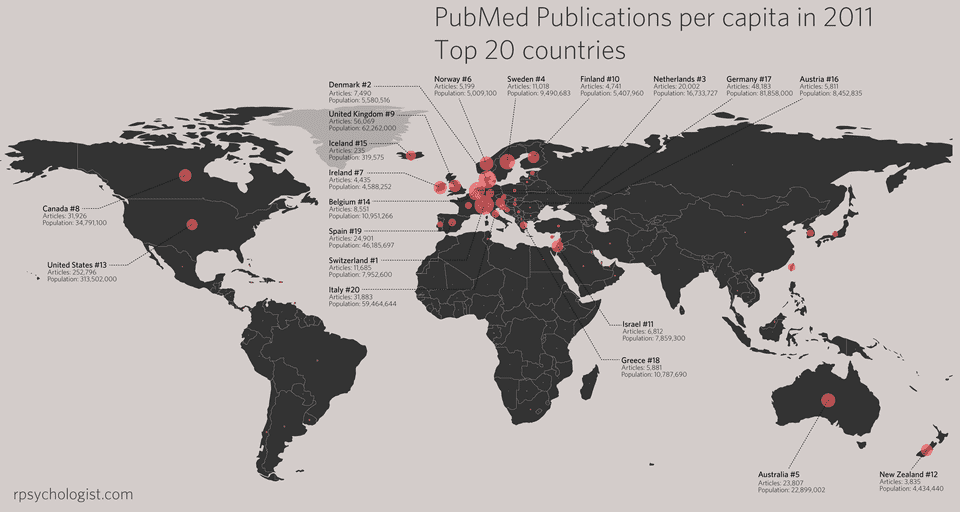 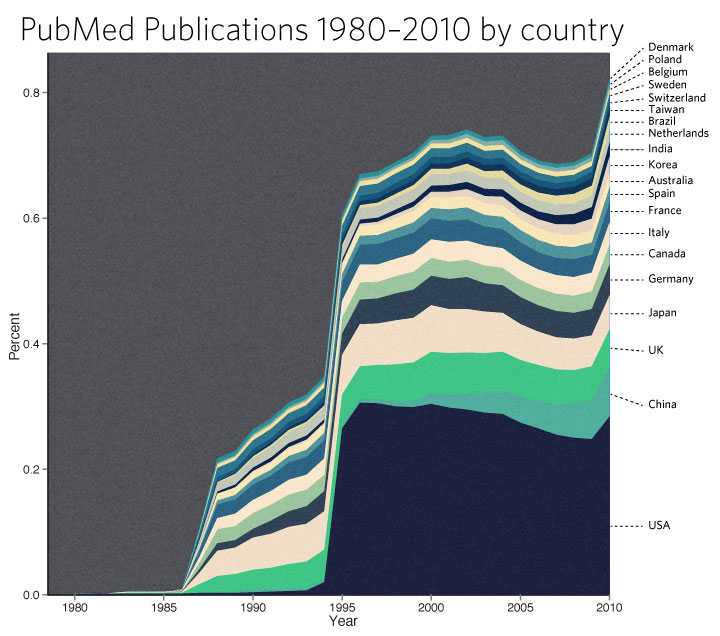 The reason for the sudden increase in US citations in the 90s is that prior to 1995 MEDLINE did only record institution, city, and state including zip code for authors affiliated with the US. So naturally, my queries will miss most US publications prior to 1995. However, the apparent question is: when will china surpass US in scientific output?

PS 1. Thanks to Allan Just for telling me how to extract centroid values from the country polygons.

A huge thanks to the 100 supporters who've bought me a 225 coffees!

This is awesome! Thank you for creating these. Definitely using for my students, and me! :-)

very useful for my students I guess

Preparing my Master's student for final oral exam and stumbled on your site. We are discussing in lab meeting today. Coffee for everyone.

Amazing illustrations, there is not enough coffee in the world for enthusiasts like you! Thanks!

🌟What a great contribution - thanks Kristoffer!

Wow - your website is fantastic, thank you for making it.

Thank you Kristoffer This is a nice site, which I have been used for a while. Best Prof. Mikhail Saltychev (Turku University, Finland)

this is a superb, intuitive teaching tool!

Thanks for making the poster designs OA, I just hung two in my office and they look great!

Thanks for your work.

Thank you for building such excellent ways to convey difficult topics to students! 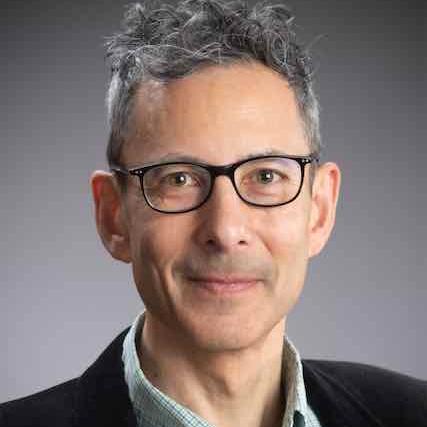 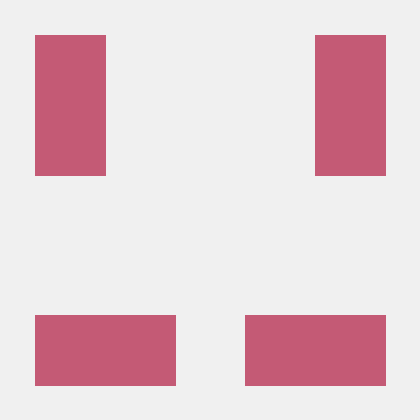 Awesome! Is there a code for this? Really interested in looking at how to do this.

Hi, Kristoffer! Just ran across your great blog and enjoyed reading it very much. Keep it up! In relation to this post's topic, I thought you might be interested in several packages created under umbrella of the rOpenSci project (http://ropensci.org), in particular 'rplos' and 'rebi' (http://ropensci.org/package.... Best wishes, Aleksandr.

Fabulous work! I would love to see output per capita annually over the last 10 or so years. Are Sweden falling behind or climbing to 4th place?

Thank you! It would be interesting to see Sweden's change over time, perhaps I will look in to that in the future.

Thanks for another great blog post! It is very instructive to see your code :-)

super cool! Thanks a lot!

Kristoffer, amazing work! could you share your entire code, including your regular expressions?

Wow, great. Can you explain a little more about how you used mysql to store and access the 8gig? Or point me to any helpful tutorial or reference. Thanks, Felix

Great job! But I suspect you mixed up labels for Netherlands and Belgium.

Darn, you are correct! Thanks for pointing it out, it's been corrected now.

Awesome! I will be great if you will share the code used to draw the figures.

I believe I will have it up by the end of this week. But just so you know, the figures are not entirely made in R; they have been polished in Illustrator.

Nice work. About the mismatches of the script performed, in all cases -- "your R script" identified higher than "PubMed using rudimentary country queries".

I was wondering if it was really an error !!!

You have extracted the data from "PubMed’s affiliation field" -- where there will be multiple countries for multi-country-author papers. But "PubMed using rudimentary country queries" is based on (probably) corresponding author's country.

This may be the reason of the miss-match !!!

The reason that my script retrieves more hits is that it's using many, many more quires to match affiliations to countries than my PubMed search.

For instance my script retrieves 3222 more hits for Japan than my PubMed.com search. This is because it's also searching for large Japanese cities and popular Japanese universities. Searching for japan[ad] will miss fields where only the town or university is reported but not the country name.

I believe I will have it up by the end of this week. But just so you know, the figures are not entirely made in R; they have been polished in Illustrator.

PubMed publications in 2011 by 202 world countries: who’s the winner?